When we originally decided to go on a year long honeymoon we gave little thought to our apartment, our vehicles, our stuff; we’ll figure it out, we naively thought. But by the end of January with a tentative departure date of March 15, we hadn’t done a single thing to address any of those outstanding items – except get consent from my mother to allow us to build a 10’x10′ shed in her back yard to house our things. 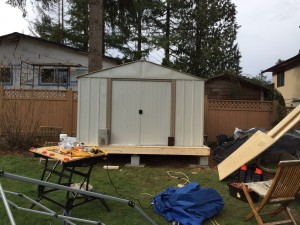 It isn’t pretty – and it turns out it isn’t functional either. Live and learn.

We originally decided to rent our place out and eventually sell it later in the year- the building would be 20 years old soon and we didn’t want to hold on to it past its prime when things started to fall apart and special assessments started being doled out. It made good sense – a downtown apartment should be able to rent easily, especially with Vancouver’s infamous 1% vacancy rate.

We found a management company that would handle everything – I mean everything (including background checks, inventory management and all issues that may arise during the tenancy) and we were happy to sign with them. With their commission and the rent price they advertised our place as we’d be breaking even – the mortgage and strata fees and other bills would be covered, and that’s about it. The condition was that since we were renting it out furnished (we packed up our personal belongings but were leaving behind our couch, bed, TV, all the basic furnishings) we had to provide specific things. They gave us a laundry list of items that had to be included (including 8 wine glasses, a coffee maker, dinnerware, servingware, bakeware, 2 sets of bedding, 4 sets of towels, etc) and it was going to cost us a fair bit to put all those items in there. We didn’t want to leave our stuff in there for the tenants since a lot of it came as wedding gifts and had personal and sentimental value. No way was I leaving my beloved Kitchenaid stand mixer, Moxie, to a stranger – Jordan bought me that for our 2nd Christmas together!

Some time around mid February/early March the real estate market in Vancouver went bananas. Houses were recorded at selling $750,000 over asking – which is absolutely ridiculous. The more we thought about it and the more we heard of these crazy sales, the more we realized it made more sense to just sell and forgo the renters entirely. What would we do if, for example, 6 months down the road we were told of a special assessment being levied for thousands of dollars? Given we had saved up for a year of travel with absolutely no income source, we’d be pretty screwed if something broke while we were away. Exactly 1 week before our departure on March 5th we met with our realtor to tell her our crazy plan. She agreed that it was a good idea to sell. By Tuesday we had a Power of Attorney for my dad allowing him to handle the closing of the sale in our absence (this way we wouldn’t need to come back). While we were busy packing, our realtor was listing our apartment and that following weekend, the 12th and 13th of March, we had an open house. Jordan and I stayed at my dad’s on Sunday night since our entire home was completely packed up and in storage. For the week preceding our trip we didn’t have cutlery, we were eating pre-made meals with a spork and a pocket knife! 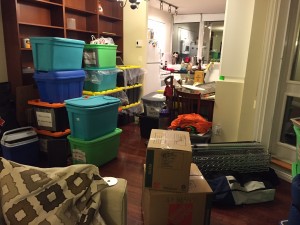 Everything getting packed and itemized in a spreadsheet – true to my OCD fashion.

We flew out on the Monday and our realtor and my dad were set to accept offers on Wednesday. We were hopeful that we’d get at least our asking price, but our realtor was confident it would be much more. She purposely listed it for less than what she thought it was worth to incite multiple offers. An hour after the offers were meant to come in we got a message from my dad. Good news – the apartment sold, and well over asking!

So now we’re homeless – but in a great, thrilling way. Although we’ll miss our first home together, we always knew it wasn’t our forever home, and it feels good that we aren’t tied to it while we’re on this exciting journey – it guarantees us a completely fresh start when we return.
The big task that lies ahead is hiring a moving company and a long term storage company and orchestrating a move completely blind, from the other side of the world. Luckily my neurosis have rubbed off on Jordan and we were both eager to pack everything and document it all in a spreadsheet, with each box labeled, numbered, and its location noted. So the moving company has to move boxes and furnishings, nothing needs to be packed. We’ve spent our evenings after the sun has set in Quito researching moving companies, long term storage companies, and getting quotes from real estate lawyers for the closing of the sale, and figuring out what to invest in while we are traveling since getting out of the real estate market in Vancouver is risky, even if we had good reason given the age of our condo. On April 25th the transfer of ownership will be complete!