Cahors
My first run in France was in Cahors.  While the city is (apparently) beautiful, we didn’t get much of a change to explore it.  Unfortunately we got in later than we would like, and after finding wifi to contact our airbnb host, arranging to have our laundry done, getting food, etc, there was very little time for sightseeing, in the evening, and we were planning on leaving early the next day.  It had been a bit of a stressful day so I decided to take a quick run, and I’m really glad I did.  Running along the banks of the Lot river was beautiful.  I was able to get a feel for the city and some of it’s architecture, and saw a few runners along the way doing the same thing.  My run was going so well (speedier than most of my runs around the world) that I decided to do extend it.

If I had done more research, I would have continued on to Pont Valentré (Valentré Bridge) and crossed there, if possible (I’m not sure if there’s a fee).  The pictures make it look quite beautiful, and it would have been awesome to include it in my route.  I ended up just doing a second loop of the Lot river, and while I missed out on the Pont Valentré, I felt a lot less stressed after my 5km.

Sauverny
Victoria and I were housesitting two cats and a boxer in Sauverny, which is right on the border of Switzerland, near Geneva.  This allowed me to do several runs in the area, all with the boxer, Zuka, in tow. Every morning I would run 3km with Zuka down past the border and along the river.  A couple evenings I did some hike/trail runs as well, though this was a literal sore reminder of how little hill climbing I’ve done in the past few months; my quads were killing me for days.  Either way the dog enjoyed it! 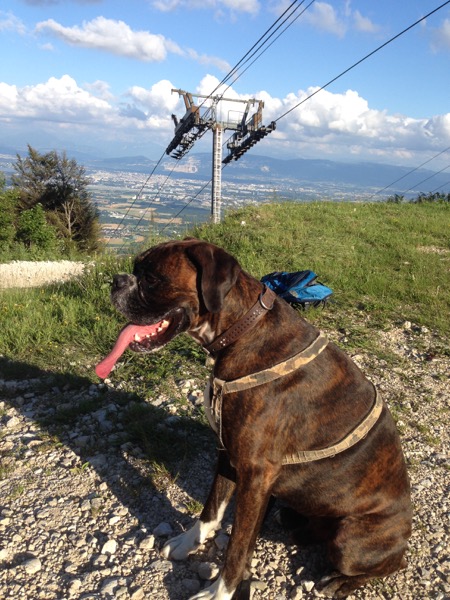