Our first stop, it took 17 hours in flight to get here! We arrived and met up with our Air BNB host, who also happened to be on the same flight as us from Panama. We shared a ride back to his home in the historical center of Quito. 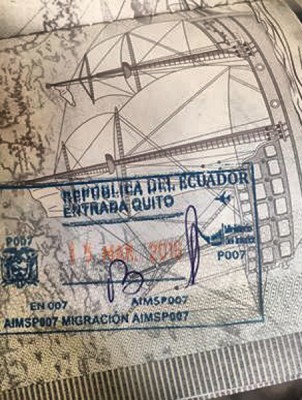 As our car climbed higher and higher in altitude towards Quito, I kept expecting to find myself struggling to breathe. Luckily, at 2700 meters, I only noticed shortness of breath when I tried (stubbornly) to lug my bag up a flight of stairs. 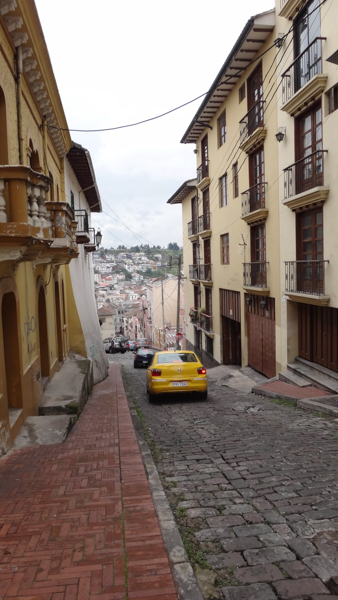 Once settled in we took the advice of our host and headed out to a little cafe with a beautiful view of the town to have a small bite to eat. 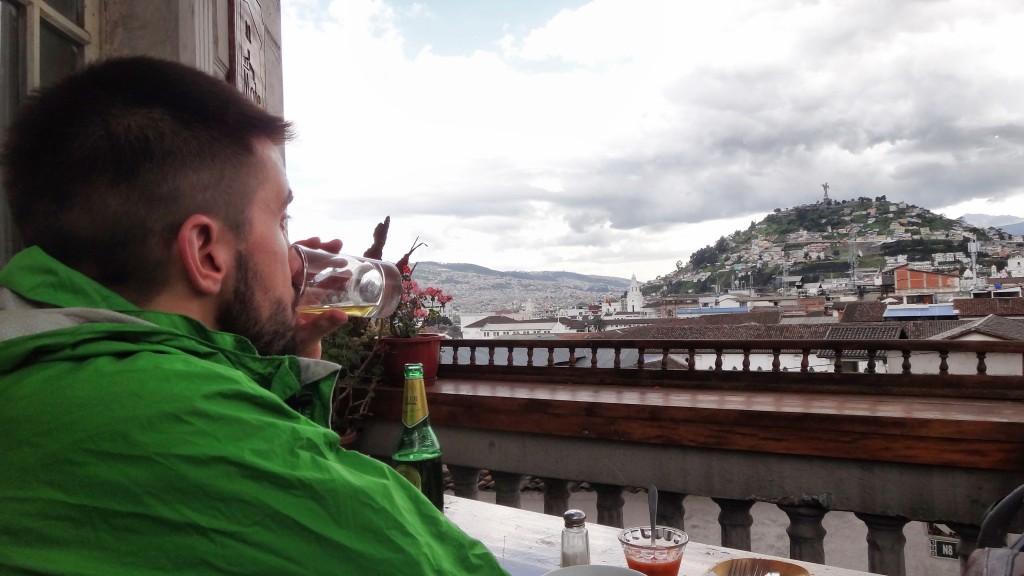 We spent the rest of the day wandering through a complete rainshower. It seems to be a pretty typical pattern in Quito – Sun from morning to mid afternoon, followed by some seriously heavy rains, and then sunset. Naturally being so close to the equator there’s less daylight hours here, so we’ve been trying to make the most of them. 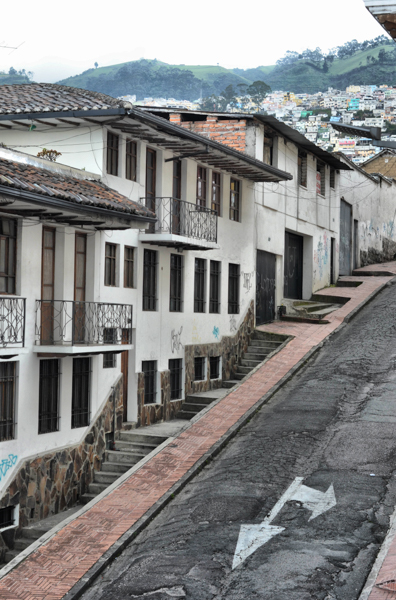 Day 2 was spent wandering from travel agency to travel agency in the Mariscal barrio trying to find a last minute cruise for the Galapagos Islands. We read on tripadvisor that you could get up to 50% off if you went pounding the pavement when you arrived in Quito rather than booking online from your home country, so with high hopes we set out. Unfortunately, given it was ‘Semana Santa” and the beginning of high season (we thought we were on the shoulder season, apparently not) this plan didn’t quite go as expected. Every agency had offers for the same two boats, and not for lack of trying. The agency we ended up spending an hour in was run by a guy named Luis who I’m pretty sure called every person he knew to see if anyone had last minute cancellations or space on their boats for us. He finally got us something and even though it was the same boat and same offer as 3 other agencies, and we could have saved money by going directly to the boat operator cutting him and his commission out, we booked through him because he honestly worked the hardest to find us something. This turned out to be the right call since when the tour operator changed our flights last minute, Luis was so worried that we might miss our flights that he showed up at our Air BNB at 5:45AM on our departure day to make sure we were going to make it. Now that’s one heck of a service – I was blown away. He said he tried calling and when he couldn’t reach us he was worried we’d miss the flight, so he woke up stupidly early on a Saturday to make sure we were aware of what was going on. 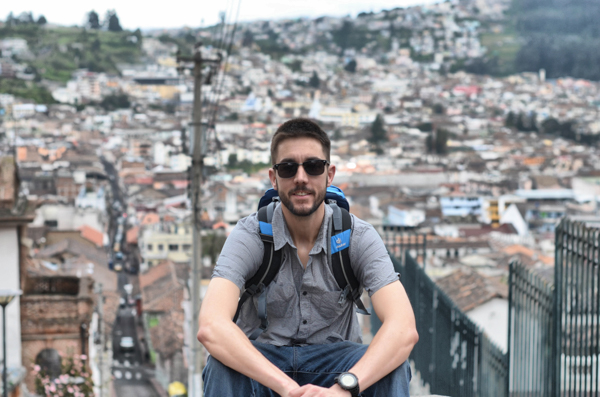 The next couple days we spent doing the touristy thing – we got the Quito “Hop On Hop Off” tour bus and explored the city. Jordan even tried going for a run, though after 4km he was huffing and puffing like I would have been had it been me. Suffice to say that while we lucked out not getting altitude sickness, we definitely feel the effects of the altitude. Even walking up hills (and Quito is pretty much ALL hills) is exhausting and leaves me short of breath. My fitbit tells me my average heart rate during these little expeditions is 123BPM. That’s more than what I’d expect from walking, and it has me utterly terrified about our upcoming Inca Trail trek, which goes to 4200 meters above sea level (we’re at a cool 2700 in Quito).

We visited the Basilica, which has impressive gothic architecture though I was disappointed to learn it was built in the late 1800s and completed in the 20th century – I hoped it would be older! 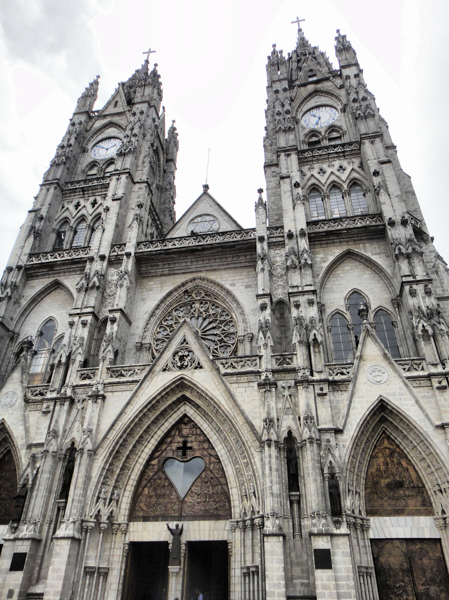 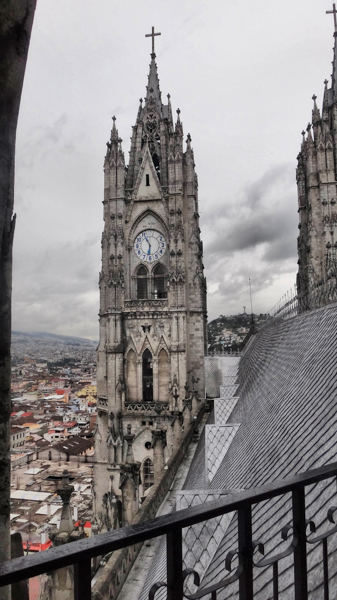 None the less it was magnificent with huge stained glass windows and interesting gargoyles made to represent the wildlife present in Ecuador. 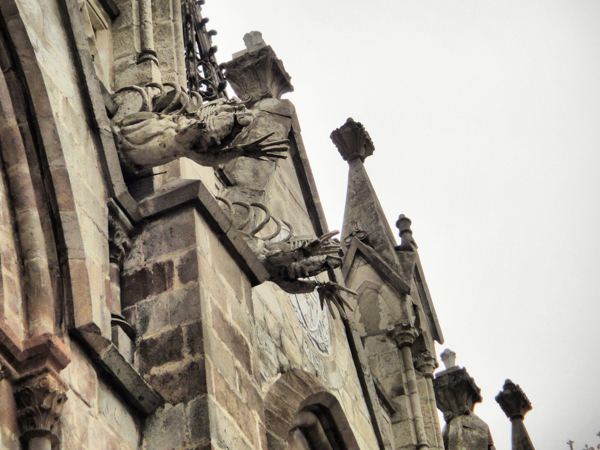 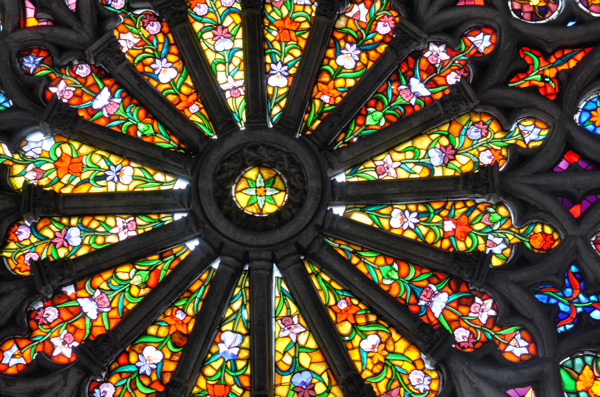 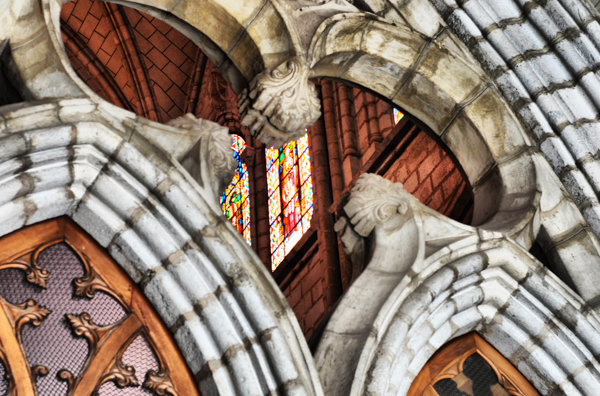 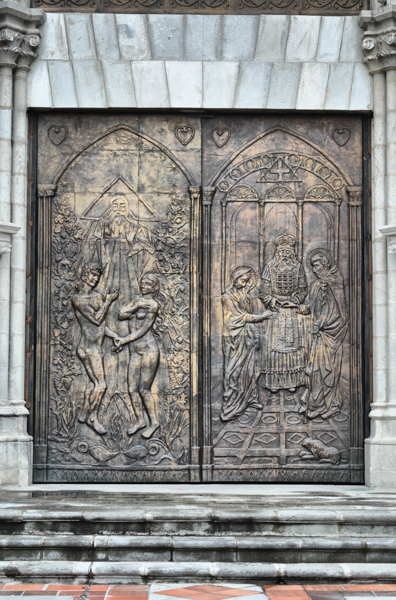 We went almost all the way up to the top towers, wandering through a narrow wooden plank bridge and climbing ladder-like stairs, which with the altitude was pretty darn hard. 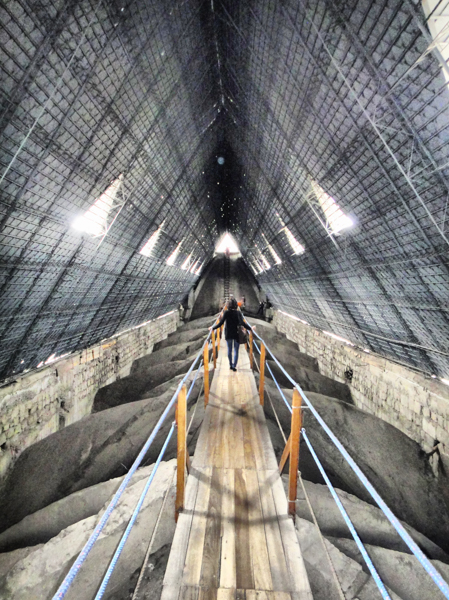 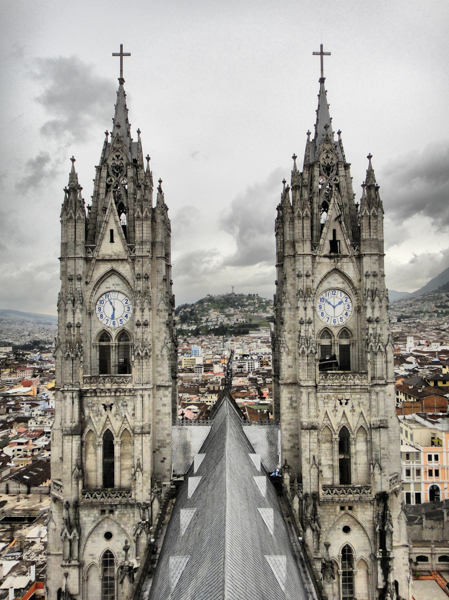 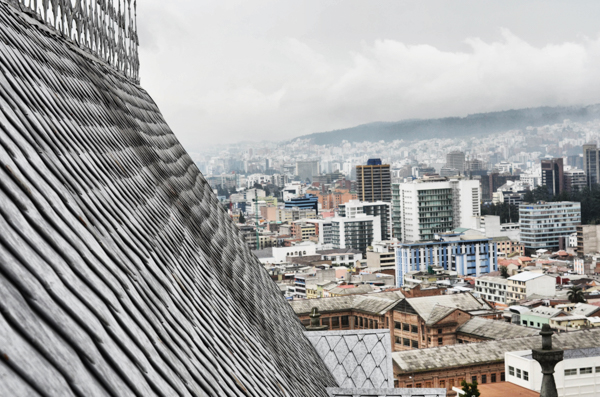 Jordan climbed even higher after I tapped out – and was rewarded with this gorgeous view:

We enjoyed the wandering in Quito but we’ve been told it’s not the best that Ecuador has to offer. While the historic center is nice, we’re looking forward to exploring further afield than the capital. 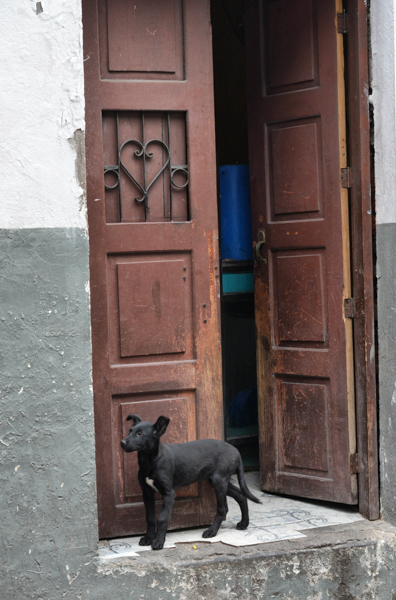 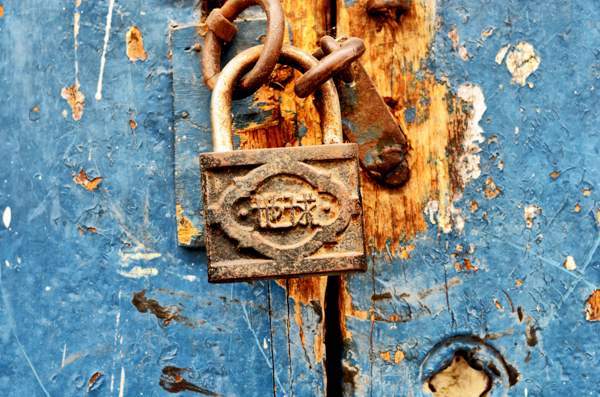 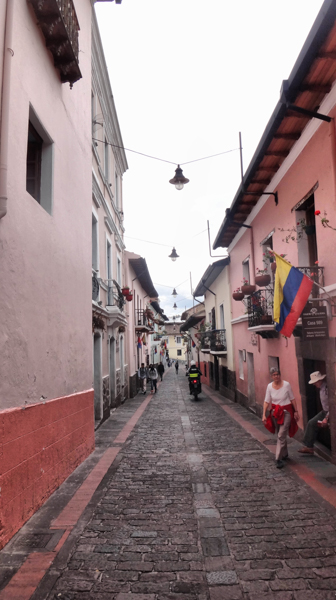