First, let’s just get this picture out of the way. 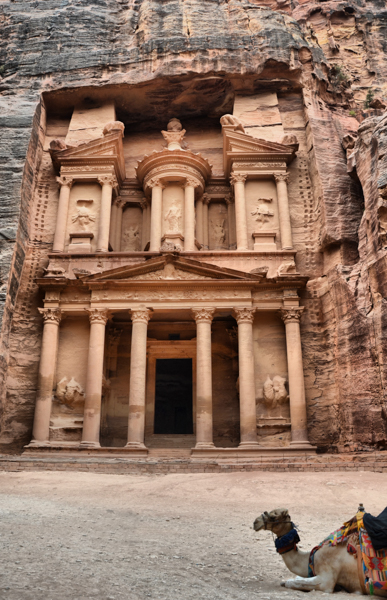 I can’t say for sure how long I’ve had Petra on my list, and I have no idea when I first even heard about the “Rose Stone City”. But what I can say for sure is that it was before I ever saw Indiana Jones and The Last Crusade – I know this because I saw that movie for the first time less than a year ago (I know). 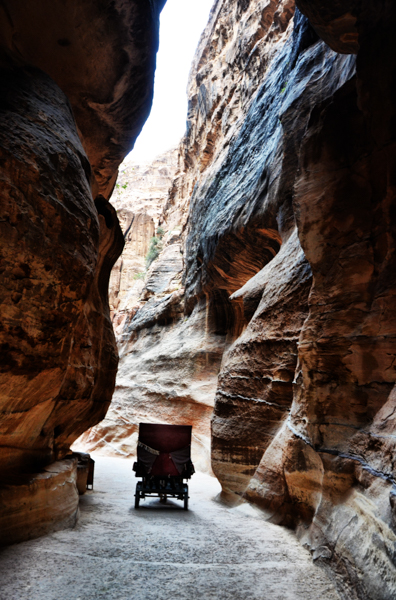 A horse carriage riding through the Siq

There’s something about 2000 year old cities carved into rocks in the middle of a desert that require you to walk through a narrow canyon crack for 2km before reaching them that just gets to me. It all seems so mysterious: how’d they do it? And why on earth did they pick this totally isolated place?  And why did it get completely deserted (pun, intended) for so long?

Panorama of The Treasury

Petra was built by a tribe of Arab people called the Nabataeans, way back in 312 BCE. They actually chose that site because of its proximity to caravan trade routes, which led to the city becoming a major trading hub and brought them great prosperity. 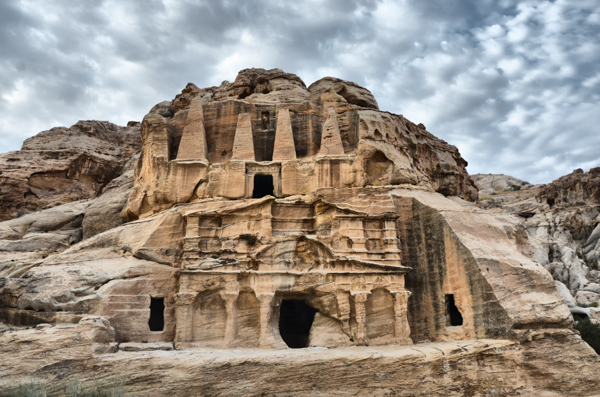 The Nabataens were quite the engineers – having created an artificial oasis by building aqueducts, dams and cisterns to make use of the flash floods that happened in the area, guaranteeing them a steady water supply during periods of drought. 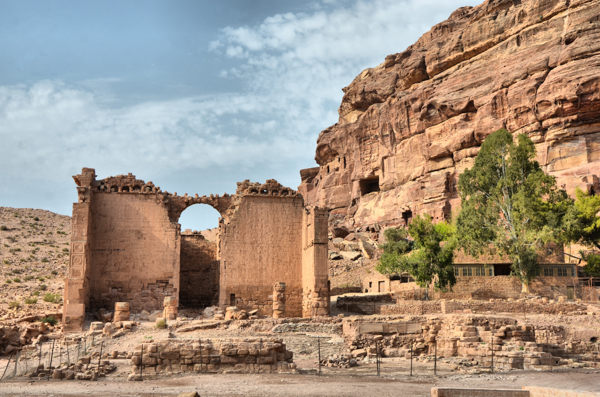 For me, the most mind blowing thing about Petra is that it was carved directly into the rock, 2,000 years ago, from the top down. 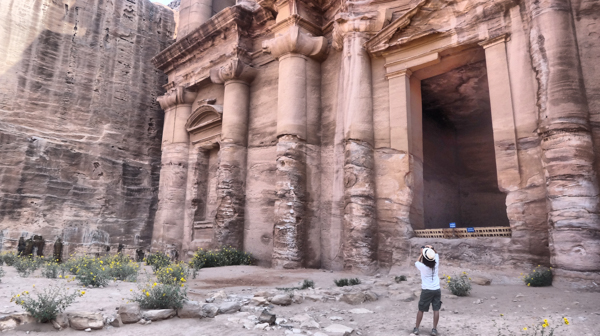 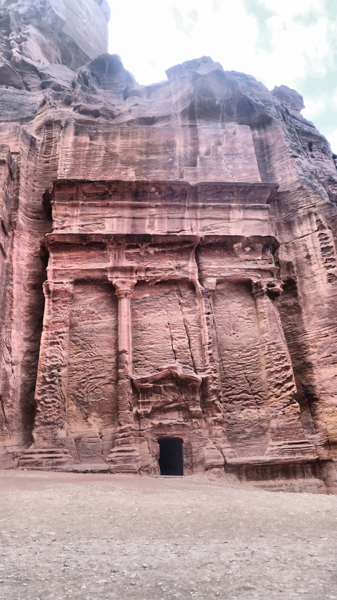 Arriving in Petra was a huge deal for me – it was a major bucket list item and ticking it off has felt awesome. Because of that, I didn’t want to spend just one day exploring the site. I had read up about it enough to know that the very minimum would be two days, and that you absolutely had to do the hike to the Monastery.

I’ve already written about how we DIY’ed our way to Petra from Jerusalem both to save money and to give ourselves more time in Petra, so this is more about our actual visit to the site. Over 2 days we visited Petra 3 times – twice in the mornings (once at 7am, and the following day at 6am, when it opened) and once at night for “Petra by Night”. 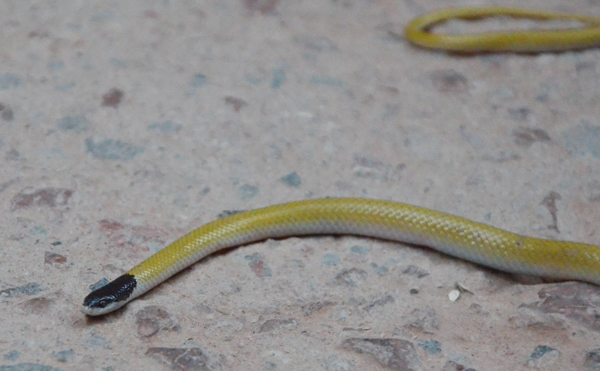 a snake we found on the walk through the Siq

For me the highlight was walking the 2 km through the “Siq” (Arabic for “The Shaft”), a narrow gorge (at the narrowest only 3 meters wide) made by water smoothing a natural geological fault split apart by tectonic forces – and catching the obscured glimpse of The Treasury, Petra’s most elaborate and famous ruin. 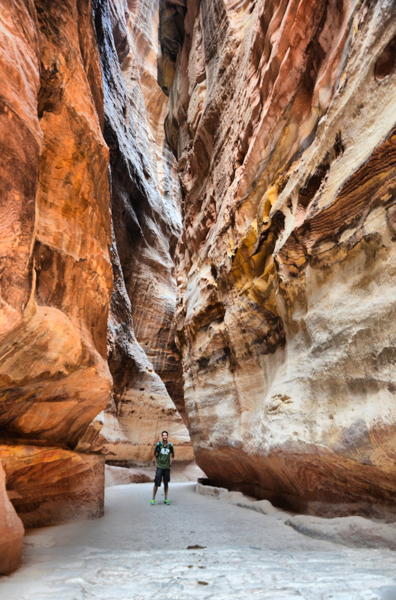 I knew that the walk would eventually lead us there, so every time we turned a corner in the gorge I thought I’d be coming upon that sight that I had waited so long to lay eyes on – only to find the path continuing to wind. 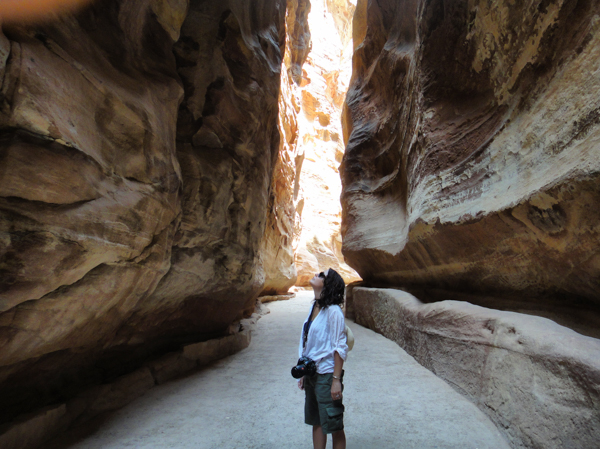 It was an excellent build up, because when we finally came across the final bend and I spotted the rosy stones through the crack, I could barely contain my excitement. 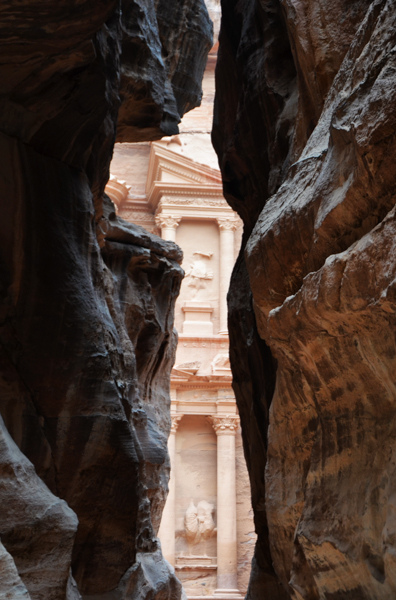 Naturally, since we had the place to ourselves save a few camels, we took the time to savour the moment and take several photos. 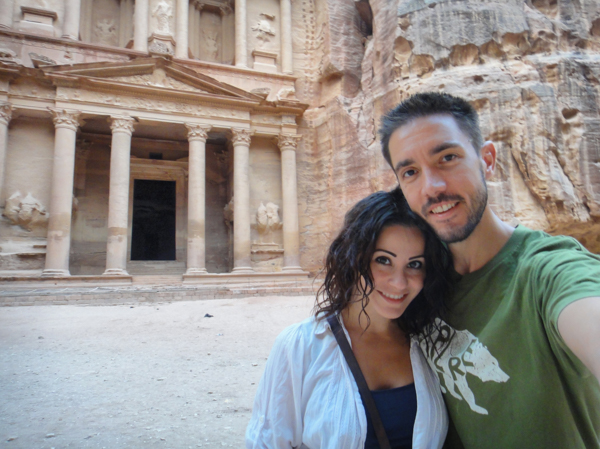 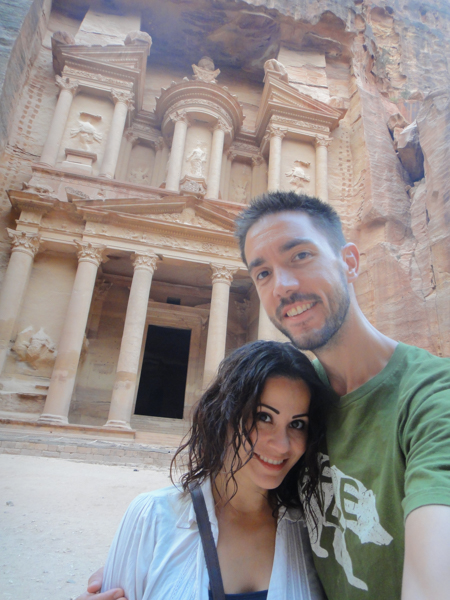 I can’t emphasize enough the value of visiting Petra bright and early when it opens. Not only does it mean that you’re exploring when the temperature is relatively cool (compared to the extreme heat you feel from 11am-3pm), but you also get the place virtually to yourself, meaning you can stop and enjoy the monuments, take it all in, and have beautiful photographs without a single soul in them. 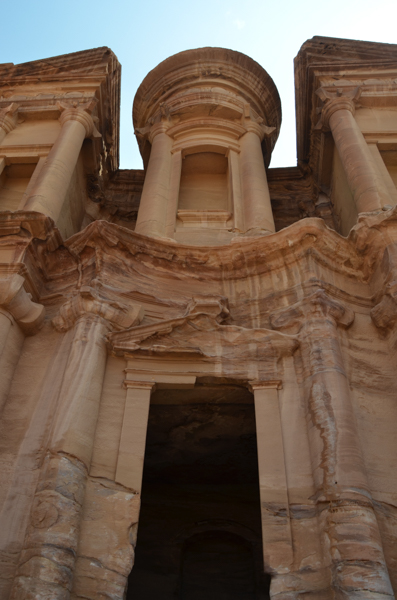 On top of the main site (which is HUGE), we did two hikes. On the first day we did the hike to the Monastery (and were grateful to be doing it at around 9am and finishing up just as it was getting hot); and on the second day we did the hike to the High Place of Sacrifice, with every intention of continuing on from there to the spot that overlooks the Treasury from the top of the mountain – except after an hour of wandering at the top of the mountain, we couldn’t find it and eventually called it a day. 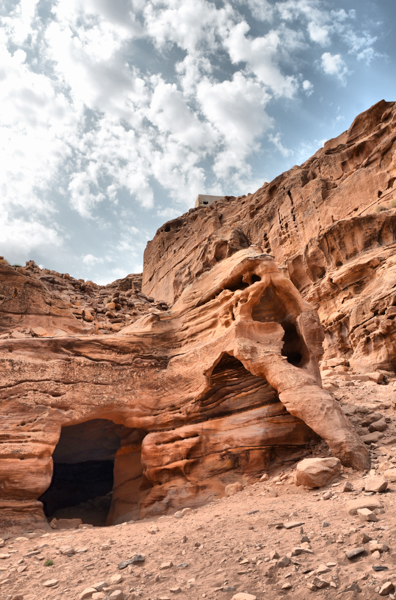 In addition to those hikes, we did a private guided tour and the “Petra by Night”, both of which we do not recommend. 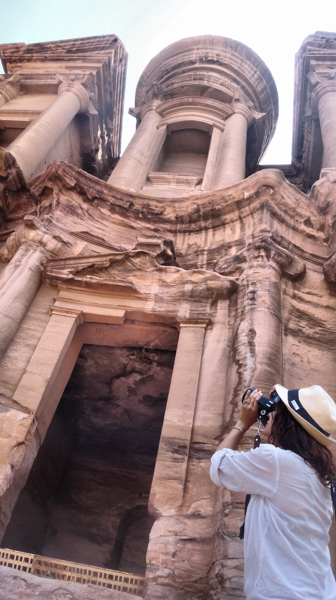 The Guided Tour: It cost 50JD (so roughly $100CAD) and is now in our top 3 worst tours we’ve ever done. Our guide didn’t tell us anything that wasn’t already clearly written on the plaques all over the site, and as we passed other groups on guided tours we heard far more interesting information being shared – we were bummed at flushing money down the drain and missing such interesting history. 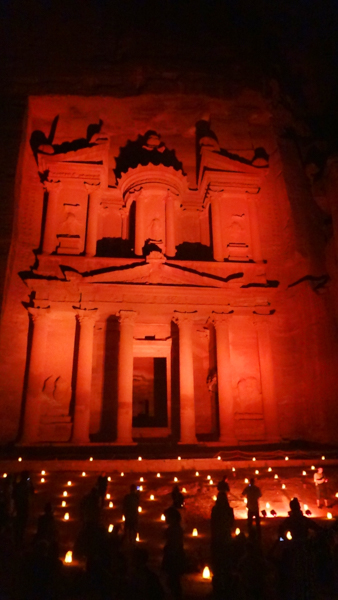 Petra by Night: It cost 17JD per person and while in theory is quite a cool idea (walking through the Siq to the Treasury with only the light of candles to guide you, arriving and listening to Bedouin music while sipping mint tea and enjoying the light of the candles and gazing up at the stars in the desert sky) the reality in this digital age was a ton of people with phones out using them as flashlights (ruining your night vision and any semblance of ambiance) and blinding you as you tried to watch the entertainment in the dark with all their lit screens. 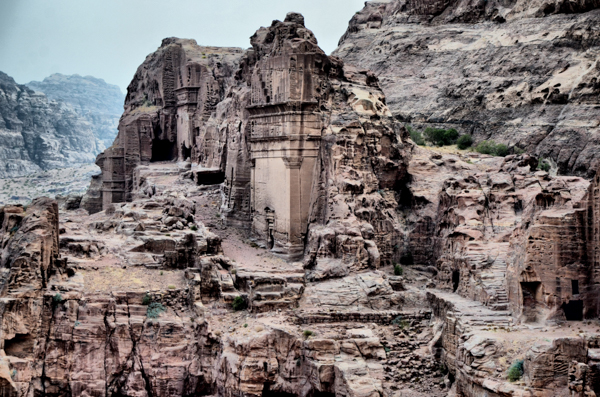 view of the “Street of Facades”

Hike to the Monastery:

Out of our two hikes, The Monastery was absolutely my favourite. Not particularly strenuous – just a bunch of stairs carved into rock, you arrive from the side of the monument and only get to see it as you turn the corner, resulting in a combination of catching your breath whilst also having it taken away by the sheer awesome you’re now faced with. 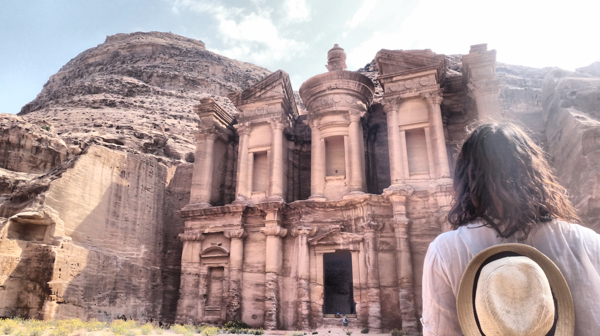 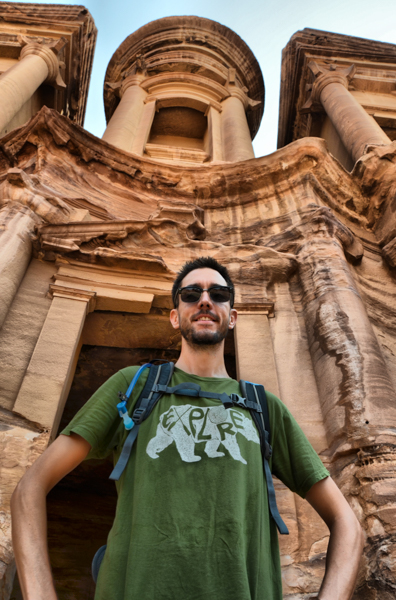 Second only to the Treasury in grandeur and fame, the Monastery has the added benefit of being on a top of a mountain, giving it seclusion as well as providing epic views, especially if you continue on to the several view points that stem from there. 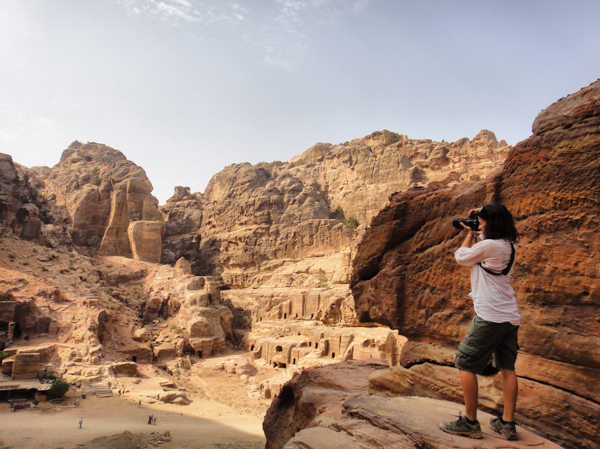 Hike to the High Place of Sacrifice

The High Place of Sacrifice wasn’t my favourite, but is absolutely worth doing if you have the time to do both. Along the route you’re likely to come upon mountain goats, which are fascinating to watch as they climb vertical rock with absolute ease. 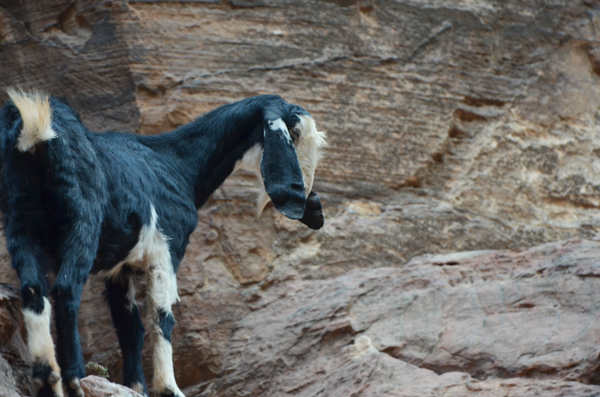 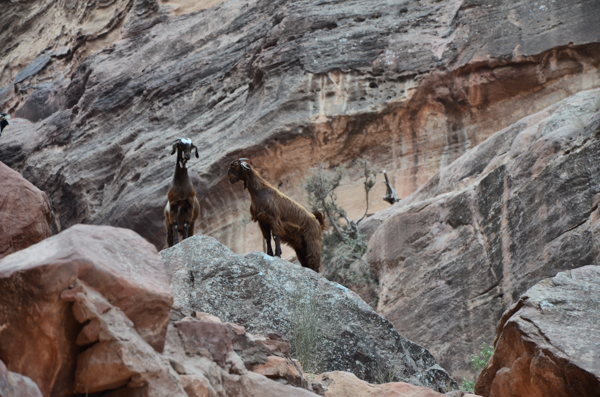 Arriving at the site you’ll find yourself at the very top of the mountain, looking at the remains of altars and what appear to be pools. You’ll also find yourself facing another gorgeous viewpoint. 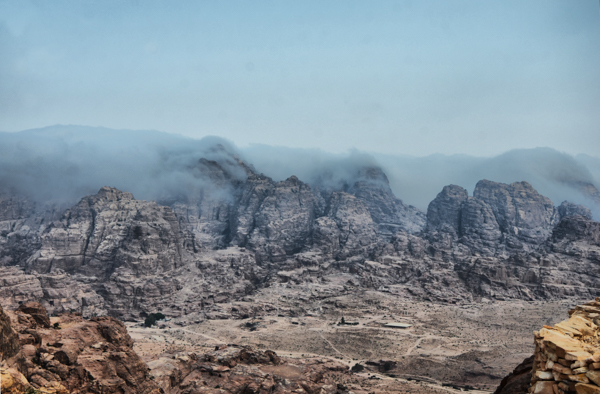 We had read this backpacker report mentioning a trail for a view above the Treasury, but unfortunately couldn’t find it, so we contented ourselves with admiring the skill of carving stairs into mountains, and the naturally occurring geological phenomena. 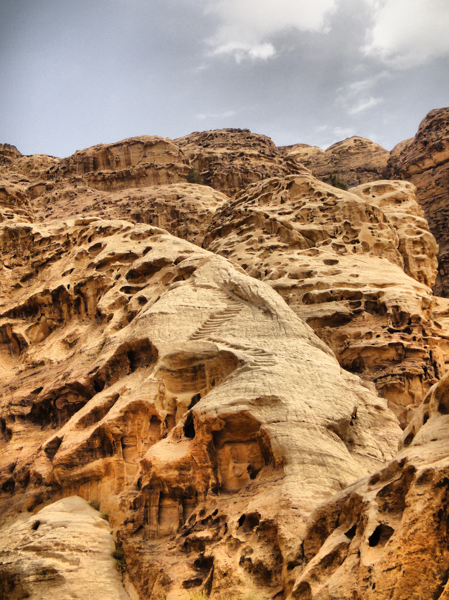 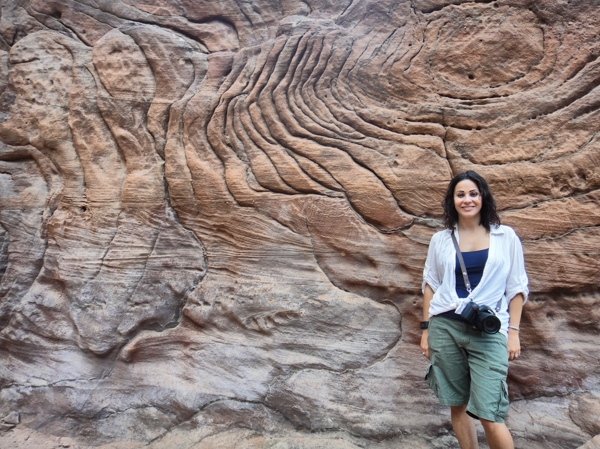 In total over the 2 days we visited the site we walked approximately 28km, with 5am-6am wake-ups, and it was wonderful. Everyone who knows us knows that Jordan is the hiker in our family, and I’m the one who begrudgingly accompanies him because, marriage; but he can attest that I was the instigator for the early start times and the uphill trudging (which he affectionately refers to as hiking) because this was a once in a lifetime opportunity and had been a long time coming – and I still feel like we barely scratched the surface of this mysterious place. 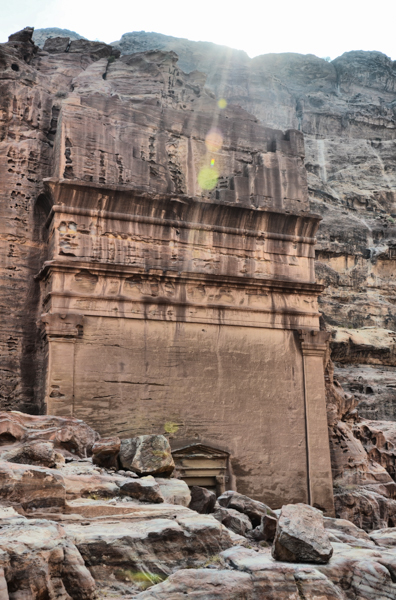 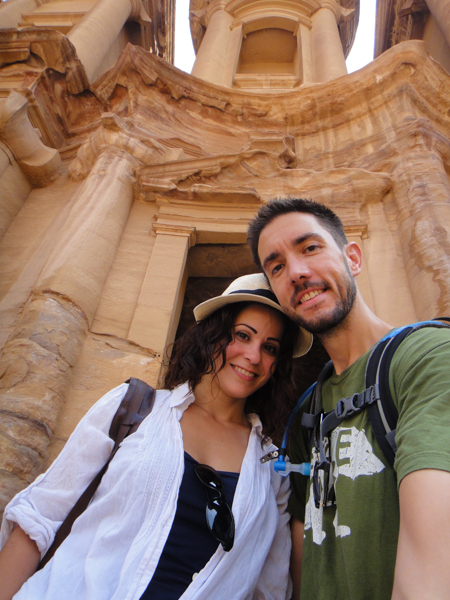