Arriving in the Galapagos Islands

After a 4 hour flight delay (that came with a $120 flight credit and a couple of ham sandwiches) we arrived on the island of Sata Cruz in the Galapagos. 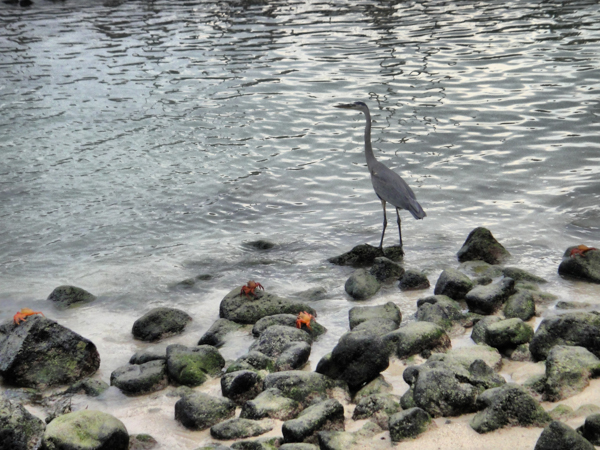 As soon as we were off the plane we were hit with an intense wave of heat – it was something like 29 degrees Celsius. We got checked in to our hotel (which thankfully had an air conditioning), each took frightfully cold showers (not deliberately, the hot water wasn’t working and it was awful), and set out to get some late lunch/early dinner. We spent the rest of the evening wandering the town, Puerto Ayora. Within moments of wandering we came upon a seal just laying out on the peer, with pelicans, frigates, crabs and herons in droves. On our way home after our wander we came upon a dive shop. Since we have a few days to explore the islands here before going on our cruise on the 23rd, we wanted to make the most of the time we had and do things we wouldn’t be able to do on the cruise – which meant scuba diving.

Despite having my open water certication from PADI (Jordan has his advanced open water) the last couple times I’ve gone diving have resulted in panic attacks. I had one bad experience in Hawaii with choppy water and a boat entry and it’s made every subsequent dive a nightmare. Nevertheless, I was determined to give it a shot so we signed up to leave for a location called North Seymour at 7am the following morning and got fitted for our wetsuits. 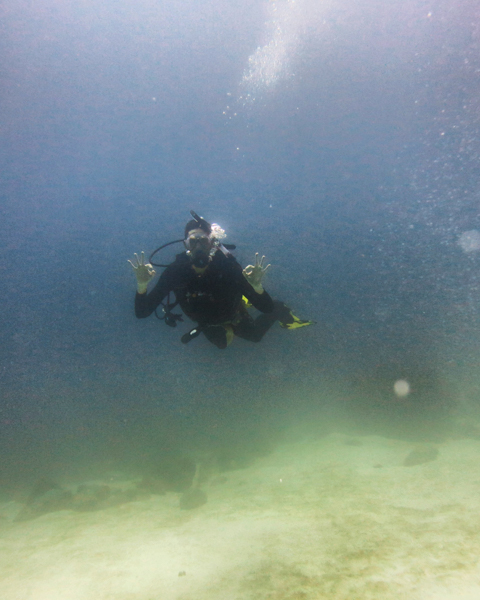 That evening we spent all our time trying to find reviews of the dive shop to make sure we hadn’t just rushed into something potentially unsafe. We couldn’t find anything on Albatros Diving & Tours except two negative reviews from 2010! It was odd that nothing recent had been shared on trip adviser or any other review sites, and that’s usually a bad sign. But we figured we’d check our gear and if we weren’t happy with any of the way they were handling things, we’d just snorkel. 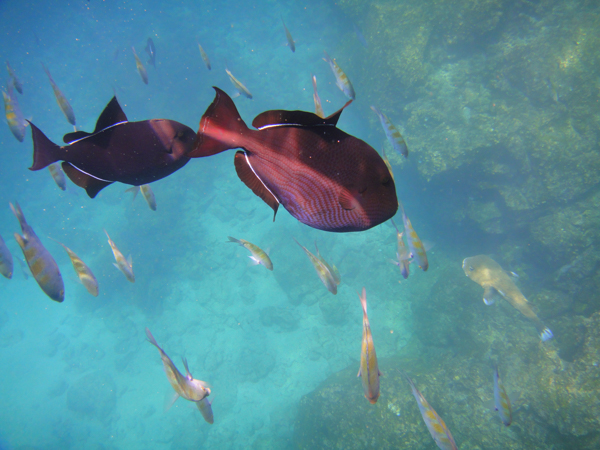 In the morning we woke up early and were at the dive shop by 6:45AM, we were put into a taxi and taken for a 30 minute drive to what seemed like the other side of the island, near Baltra (where the airport is). Once everyone was on board (there were 8 of us total, 6 diving, one snorkeling, and one doing his first dive ever) we took off and got a briefing from our guide. I let the guide know that I had a history of panic attacks and needed to ease into going under slowly – he said not to worry, he’d make sure I was fine.
We got geared up and on the count of 3, all the divers fell backward into the water – all except me, since I started freaking out. It takes me a while to remember how to breathe only through my mouth with the regulator and the guide sat with me encouraging me to give it a shot. Once we were all in the water he said it was time to descend. That’s where it went downhill for me. Ever since Hawaii I’ve needed time to get accustomed to having the reg in my mouth before going down. I needed to be able to dip my head under and come back up a few times and just get comfortable. Unfortunately, the whole group was waiting for me and I didn’t want to be the killjoy, so since acclimatizing wasn’t an option, I bailed and went snorkeling, completely disappointed in myself for not being able to get past such a silly, irrational fear. 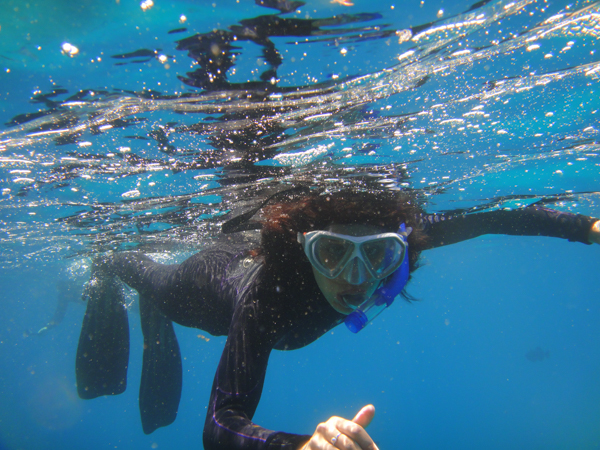 Jordan and the rest of the guys all had a great first dive, saw some cool fish and the outline of a hammerhead shark. When they came up for a break and to eat some snacks before their next dive it was time for the guy who was doing his first dive ever to go down. While he was doing his dive, one of the divers on our boat who had decided to go snorkeling called out “Sharks!” and everyone jumped in to the water to have a look. Sure enough, there were a few magnificent white tipped reef sharks swimming around. 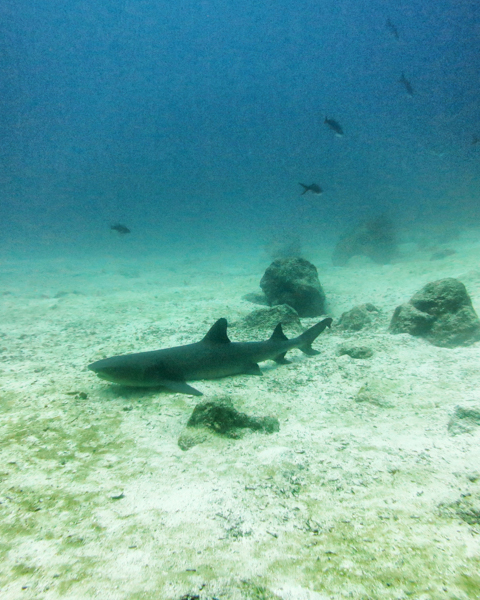 For their second dive, I didn’t even bother trying. I was feeling nauseated (something that seems to only happen when I have a panic attack) so I stayed on the boat staring intently on the horizon, watching the seals play on a nearby island and chatting to the crewman and captain. 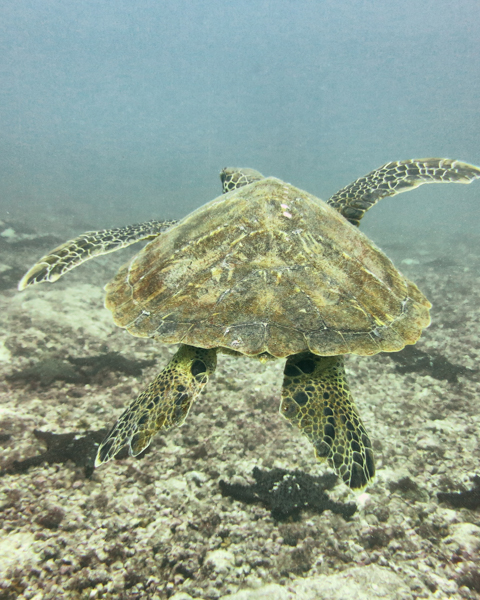 When the dive was over we all dried off, had some more snacks and headed back to town. We had lunch included in the tour, so we were taken to a restaurant near the dive shop and given a fixed menu meal. After that we all parted ways, and were told to come by the dive shop in the evening to get a copy of all the photos (also included in the price) 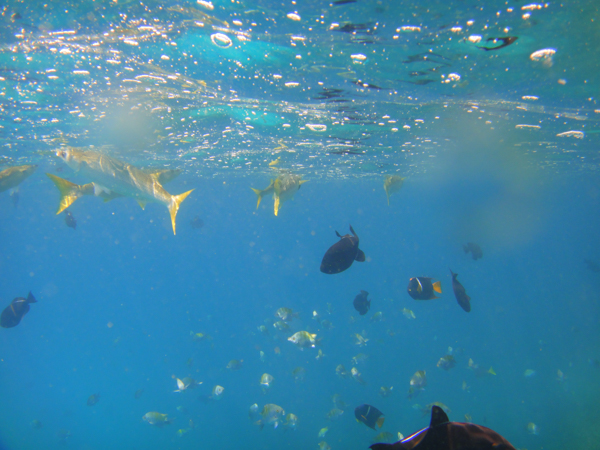 All in all the dive shop seemed to put on a good tour. The only complaint I had was that we weren’t really given an opportunity to check the gear before putting it on. It sucks that I wasted so much money to not dive at all, but at least I got to see some of the same marine life that the divers got to see while snorkeling.